Los Angeles is a city of contrasts. Beautiful beaches,  Hollywood Hills, the sparkle of fame and celebrities, but it also has it`s rough sides. If you want to dig a bit deeper than the glam & glitter at the surface, visit the Arts District – LA`s pulsating heart for artists, musicians and all creatives.

The vision of LA that this is the place where dreams are made, lures many to the City of Angels. However, of those in search for fame, only few will see stardom and glamour.  Next to the dream factories, you can witness the daily hardship and struggle of those who got lost on their way. Success and failure, abundance and scarcity, dreams and reality  –  Unlike in any other western developed city, the closeness of contrasts is more haunting than here.

Los Angeles is as diverse as it only can be. There is much more to LA than the sparkle of Hollywood`s shiny surface. One of the best examples is The Arts District. This artsy community in Downtown LA roughens things up in a city known more for it`s glitz than it`s grit. Former industrial buildings and impressive large-scale murals dominate the edgy atmosphere. Moreover, you can find some of the best restaurants, bars and coffee shops here. Home to creatives, young visionaries and hustlers –  LA`s Arts District is a celebration of art as I have never witnessed before. There is no better place to discover the beauty and depth of public art than in this scenic community.

Angel City Brewery is both brewery and canvas. Their home in the LA Arts District gives an edge to the existing beer community. Located in a former industrial building, Angel City Brewery is a great meeting point to experience fine crafted beer, cool scenery and friendly staff. LA is as ambitious as it is diverse — and so is their beer. As the only active brewery in Downtown Los Angeles, Angel City Brewery is part of the brewing renaissance of Downtown LA by bringing old-world, small-batch, craft brewing to the new world of the expanding Arts District. Food lovers can enjoy great food – the parking lot has become a hot spot for food trucks, with one parked outside nearly every night.

Colette Miller’s Angel Wings at Angel City Brewery have turned into a popular object for pictures & snaps. It all started in 2012, when the mass of ads and commercialism evoked the wish in her to create something enlightening for the people. After she painted the first pair of wings in the Arts District of Los Angeles, she further developed the idea into a global project by setting up wings all around the globe. Whether street kids in Kenya, musicians in Australia, police officers in Mexico or opposing parties in conflict areas – the wings cross class, religion and nationality. Colette`s message is that “We can be the Angels of this Earth”.

– Good beer might be a start to bring heaven down to earth. 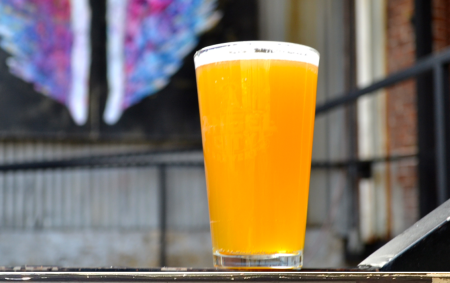 Peace by Piece was painted in January 2015 at The Container Yard in Downtown Los Angeles. The mural addresses the conflicts and debate around gun violence and gun control in the United States. Compared with other high-income countries, the United States has a homicide rate 6.9 times higher. Each year more than 11,000 people are killed with guns in the United States, an additional 20,000 people commit suicide with guns and 80,000 people survive gunshot wounds. – That means at least 111,000 bullets pierce the bodies of  people each year. Gun violence is a nationwide issue that does not only cost too many lives but also billions of Dollars taxpayer`s money each year.

Botox Junkies, Eaton`s 2nd mural in the heart of LA’s Arts District highlights our obsession with beauty and eternal youth. There is barely a place where this cult is exerted to a greater extend than in Hollywood. The dream factory produces men and women with external perfection – magazines, ads, and the Internet are spreading these unrealistic ideals. The business with plastic surgery far beyond Hollywood shows that the beauty cult is getting out of hand. With “Botox Junkies”, Tristan Eaton sheds light on the longing for perfection. Where is the limit and how far should we go?

The one with Bubbles. When commissioned for this work, Kim West was asked to create something “optimistic, hopeful, and happy.” The girl blowing bubbles is from an imagery she had found  in a magazine — a photo of an actress blowing bubbles from a wine glass, while lounging on a couch. Pierced with thousands of gold and silver straight-pin heads, the floating bubbles framed by jasmine blooms evoke ease and happiness in every onlooker.

Welcome to Hollywood provides a cheeky commentary on the entertainment industry. The 20′ x 48′ piece depicts a violent pack of fighting coyotes destroying each other, while pink-hued butterflies flutter amidst the carnage. Beauty and ferocity are well intertwined in this artwork as an allusion to Hollywoods duality – Harsh competition and rivalry underneath a glamorous surface. 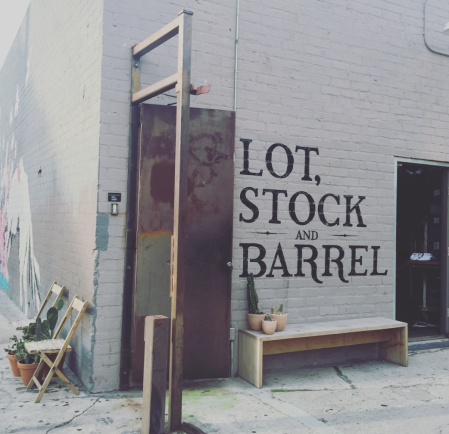 Every Piece of Ivory comes from an Elephant

Every Piece of Ivory comes from an Elephant was painted by Los Angeles artist Damon Martin as part of an international campaign commissioned by the IFAW (International Fund for Animal Welfare). The mural brings awareness to the need to protect elephants against the illegal ivory trade. The demand for ivory to make decorative items, jewelry, and trinkets is pushing elephants to the brink of extinction.

“I am trying to bring awareness to the fact that the United States is still the number two consumer of ivory in the world. They’re destroying this amazing, incredible, and highly intelligent animal for $500..It’s not only destroying the animal. It’s destroying the community and who we are as a species.”- Damon Martin

Damon Martin painted this mural from an image of the Chinese artist and activist Ai Weiwei. Holding his signature porcelain sunflower seeds, the portrait refers to Ai Weiwei’s work, ‘Sunflower Seeds’, at Tate Modern that is made up of millions of handcrafted porcelain seeds. As a statement regarding society, politics and economy in China it alludes to the globalization and mass production in China.  – Thousands of cheap laborers, assembly lines in gigantic factories, and tedious procedures  at the bottom of the production chain that cater to western consumerism.

A Symbol of Humanity in an inhuman era

The sunflower seed is a common street snack in China. It evokes the memory of hardship and hunger during the Cultural Revolution and the era of socialist planned economy under the worship of Chairman Mao Zedong. While individuals were stripped of personal freedom, propaganda images depicted Zedong as “the sun” and the mass of people as sunflowers turning towards him. Yet Ai Weiwei remembers the sharing of sunflower seeds as a gesture of kindness and compassion  – A symbol for humanity in an inhuman era. 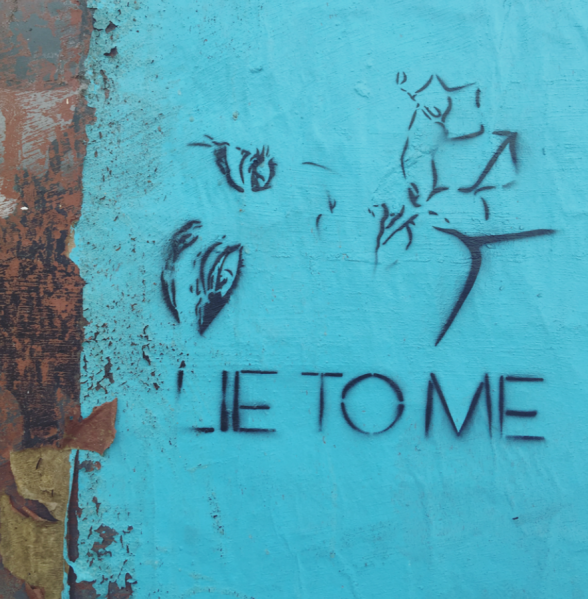 The Heart of Los Angeles

The Heart of Los Angeles was created by LA based artist Tiphanie Brooke with the intention to express her love for the City of Angels. Initially designed by Brooke as a sort of response to Milton Glaser’s famous “I Heart New York” logo from 1977, the Heart of Los Angeles has quickly become an urban art icon that is spread all over the city.

Spreading the Love for Los Angeles

The first heart was green and created in May 2012, when Tiphanie Brooke moved back to Los Angeles, the city where she had spent her early years. Next, she created a lovelife heart. The Los Angeles Heart was an extension of these early versions – instinctually made and carefully crafted for Los Angeles. She added glitters and colors based on things going on in the city. When the Lakers had a losing phase, she created a purple and gold ombré glitter heart in support. When the Dodgers fought tough luck, Brooke and her partner Mike Polson put up a blue glitter heart. You can find The “Heart of Los Angeles” at numerous locations dispersed in the city – spreading the love for Los Angeles in different colors and styles.

Shepard Fairey is a street artist that emerged from the skateboarding scene. He became widely known during the 2008 U.S. presidential election for his Barack Obama “Hope” poster. The Institute of Contemporary Art, Boston calls him one of today’s best known and most influential street artists.

Peace Goddess is Shepard Fairey`s impressive portray of the Greek mythological figure Eirene, the personification of peace and wealth. As a symbol for peace through cooperation and reconciliation, the mural is a powerful statement to remind us that through successful diplomacy, conflicts can be resolved and wars averted.

Legislative Influence for Sale. Shepard Fairey’s latest work, a hand-sprayed stencil of Ronald Reagan in downtown LA, depicts the late president. In his hands, the conservative icon holds a sign that reads, “LEGISLATIVE INFLUENCE FOR SALE.” The artwork sheds light on the  presidency of Ronald Reagan in the United States which was marked by numerous scandals of lobbying and bribery. “I was tired of people blaming Obama for the poor economy. Really, it all goes back to Reagan.”- Shepard Fairey

A Space to Dream

I have to admit that I was absolutely clueless what was behind the artwork, when I took pictures of the beautiful murals in LA`s Arts District. Only through the research for this article, I learned that public art is much more than opposing commercialism or political establishment. By placing something memorable in unusual places, it can raise awareness, stir political debates or create something enlightening for the people. Public art has a power –  It can connect people independent from race, nationality, class or lifestyle. As in the words of Shepard Fairey “Art gives a space to dream”.  In a world dominated by rationalization, wars and conflicts, we need this freedom more than ever.